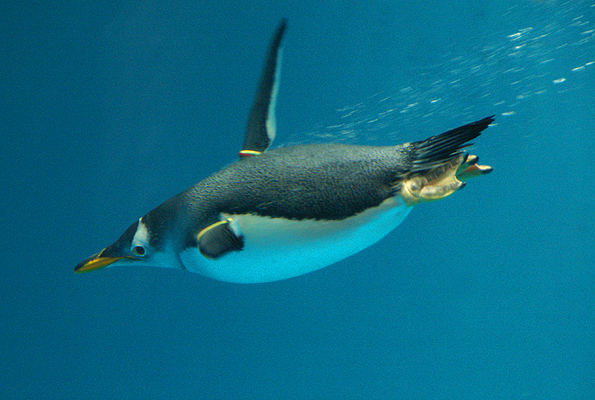 April the 25th is World Penguin Day and this article is to give you a bit of an insight into these wonderful creatures.

Browse through a few facts, have a bash at out quiz and groan at our collection of Penguin Jokes

Q: Who is a Penguins favourite Aunt?
A: Aunt Artica

Q: What’s black and white and red all over?
A: An embarrassed penguin.

Q: Why don’t you see penguins in Britain?
A: Because they are afraid of Wales.

The devout zookeeper lost his favorite Bible while he was mending fences out at the zoo. Three weeks later, a penguin walked up to him carrying the Bible in its beak. The zookeeper couldn’t believe his eyes. He took the precious book out of the penguin’s beak, raised his eyes heavenward and exclaimed, “It’s a miracle!” “Not really,” said the penguin. “Your name is written inside the cover.”

A woman walks up to a handsome man in a nightclub and shouts: ‘Fat penguin!’

Excuse me?’ he says, looking bemused.

‘Sorry,’ she replies. ‘I was just trying to think of something that would break the ice.’

I want to defend a penguin in court just so I can say, “Your Honour, my client is clearly not a flight risk.”

If you know of a Penguin Joke that is any better than these (shouldn’t be too hard) please drop us an email and we will include it on this list.